Elkem has a long and illustrious history as an industrial corporation in Norway. Prior to the company’s acquisition by Norwegian conglomerate Orkla Group in 2005, we had a well-established treasury function, which was then consolidated into Orkla’s Group Treasury function. Over time, the strategic focus of the Orkla Group changed, with less of an emphasis on industrial manufacturing and more on consumer brand products. Consequently, Elkem was divested and acquired by Chinese company China National Bluestar (Bluestar) in 2011.

Elkem was already a sizeable group in its own right before the acquisition, with multiple subsidiaries internationally. Consequently, the group had diverse, complex cash and treasury management requirements including financing, intercompany funding, hedging and cash and liquidity management. It was therefore important that the company developed an independent treasury function quickly following the divestment. In parallel, the acquiring business Bluestar was developing its international profile. As a result, its cash and treasury management needs were becoming more sophisticated, and although the company already had a treasury function in China, it was important for the group to develop an international treasury presence. We have therefore developed Elkem’s new treasury function in a way that anticipates developing its role in co-operation with Bluestar in the future. 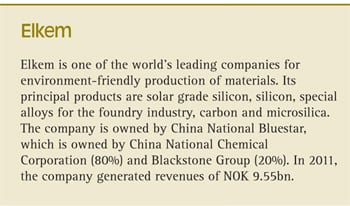 Following the divestment of Elkem from Orkla Group, we recruited a new treasury team, which now comprises four people including back-office functions (and nine people including credit management tasks), and formed an agreement with Orkla that they would continue to support Elkem’s cash and treasury management activities during an interim period while the new function was developed. The new team was tasked with a comprehensive range of cash, treasury and risk management responsibilities, including responsibility for some activities that are typically less common in treasury, such as credit management, collections and credit insurance. Our requirements across cash and treasury management were reasonably diverse and complex, as Elkem has substantial revenues, the majority of which are generated outside of Norway, while most of our cost base, including production, is within Norway. The group is capital-intensive, with a cyclical cash flow profile, so managing liquidity and FX risk are particular challenges.